On the replay it looked like Lown caught it and threw it in the net. Otherwise I have no idea how it got wide, to the side and behind the post and then back and around the post. Can't see the puck but there is a distinct motion with his glove around the post. It's not on either stick and didn't hit either player (Lown or Lizotte). 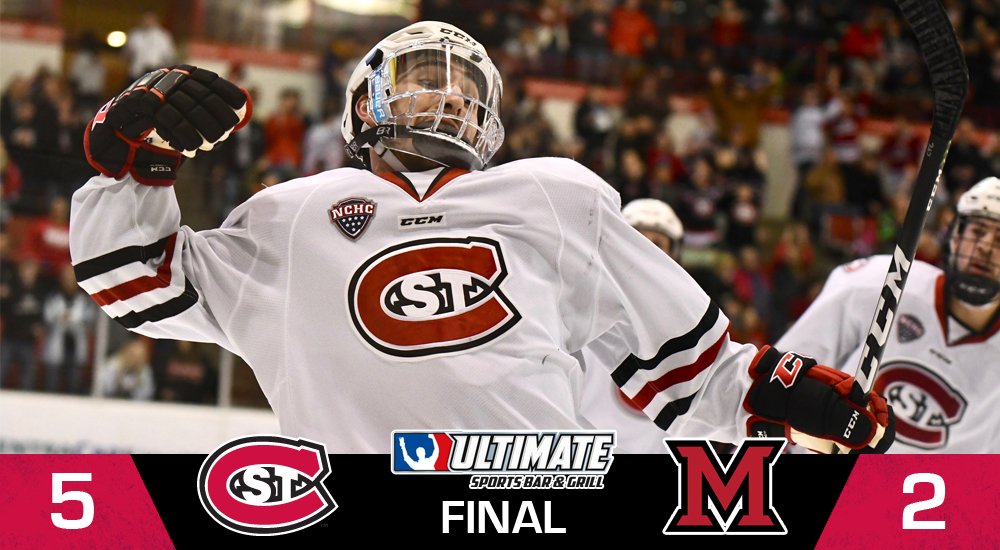 HUSKIES WIN their first game in the NCHC playoffs! Make sure to swing by your St. Cloud Tim Horton’s, tomorrow morning, before noon for your free medium coffee!

Miami Men's hockey
Huskies Pull Away in Third in Playoff Opener
Miami pulled within a goal of No. 1 St. Cloud State in the third, but dropped the playoff opener. 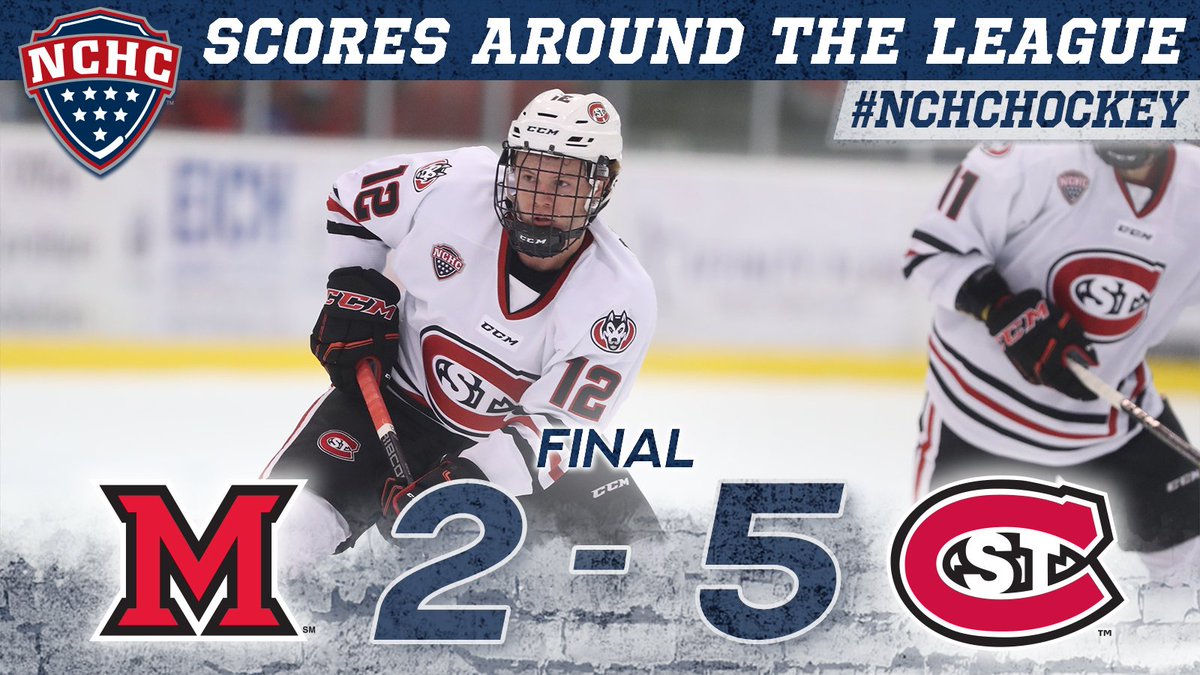 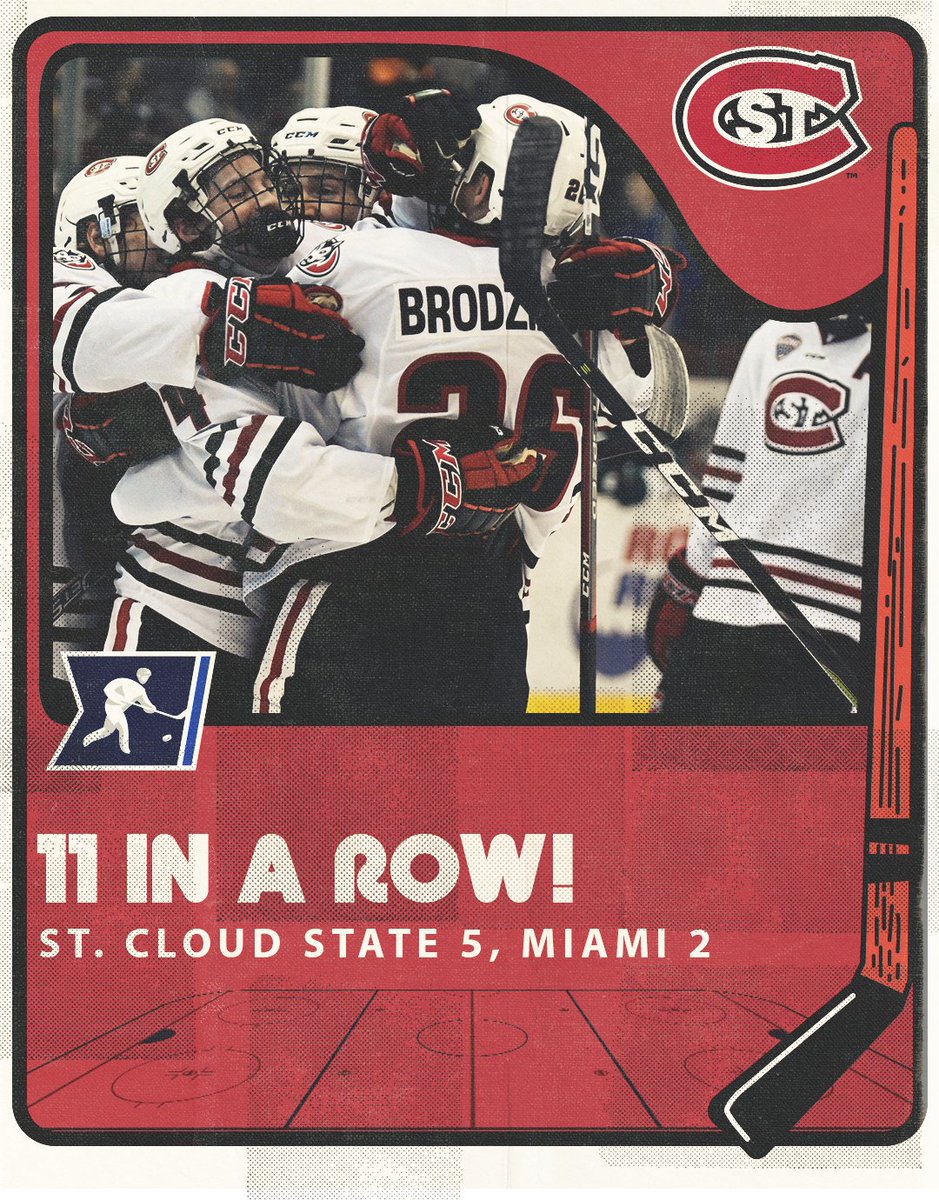 centericeview.wordpress.com
Huskies Nail Down Game One vs Miami 5-2 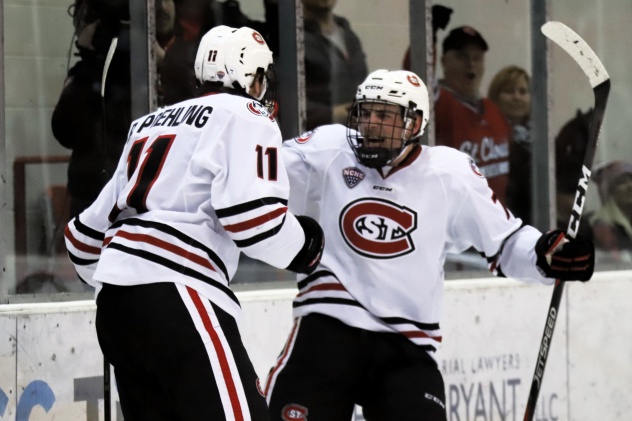 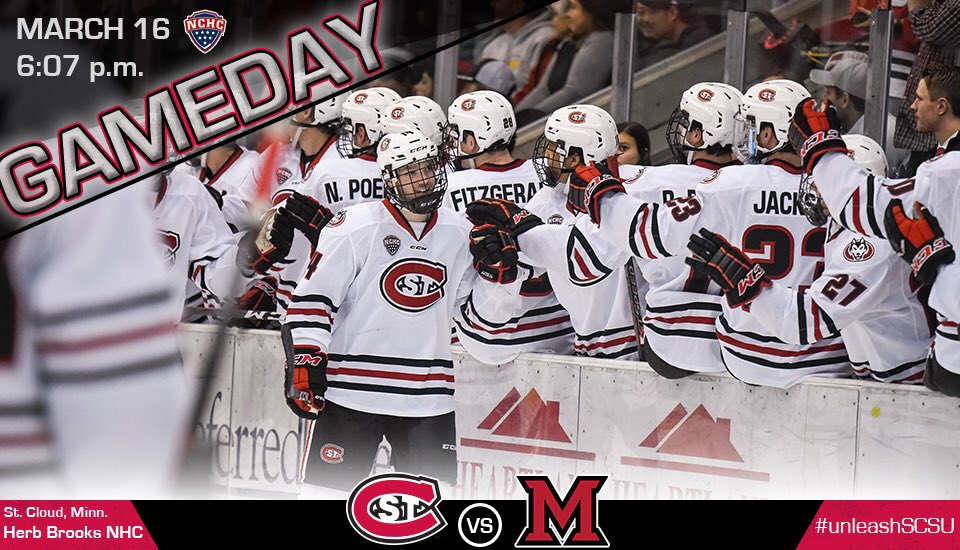 Huskies doing what they do. A couple pretty goals, overcoming whatever problems they run into. I'm starting to think next year won't be as big of a collapse as I thought the way the Freshmen and Sophomore class are playing, #2 is a large drop off from this team anyways so there's some margin for error. Lets win these final 6 games before we worry about that.
Top

Fantastic game and we’re headed to The X!

The Huskies finish the season UNDEFEATED at home, going 17-0-1!

Hrenak was better than his numbers, nothing he could’ve done on their 3rd tally, it took a weird bounce off the pipe and dropped right behind him to be tapped in by the crashing Redhawk and he did all he could on Goal 2 but a 2-on-1 is so hard to stop No. 1 Huskies are headed to the X

The NCHC
‏@TheNCHC
3h3 hours ago
More
FINAL: @SCSUHUSKIES_MH completes the Quarterfinal series sweep of @MiamiOH_Hockey to advanced to its second straight #FrozenFaceoff! 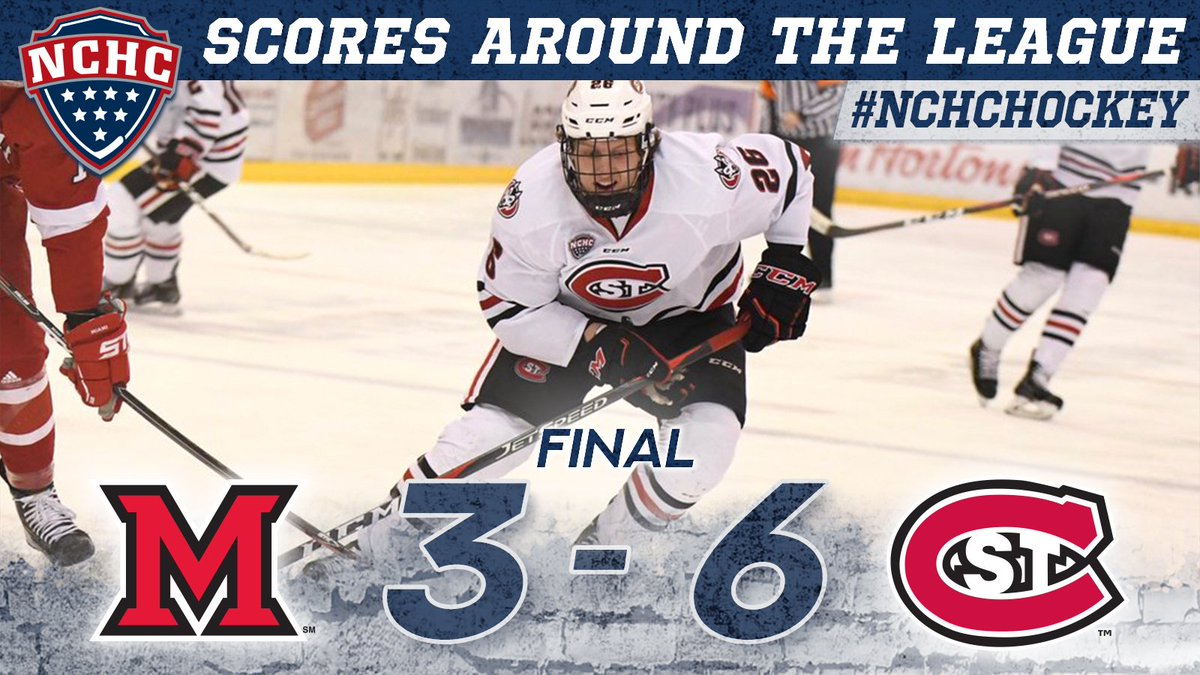 SCSU Men's Hockey
‏@SCSUHUSKIES_MH
3h3 hours ago
More
#1 @SCSUHUSKIES_MH sweeps @MiamiOH_Hockey in the NCHC Quarterfinals and advance to the Frozen Faceoff! The Huskies' end their 2018-19 season undefeated on home ice; SCSU has a 29-4-3 overall record going into the conference tournament #unleashSCSU #SCSUvsMiami 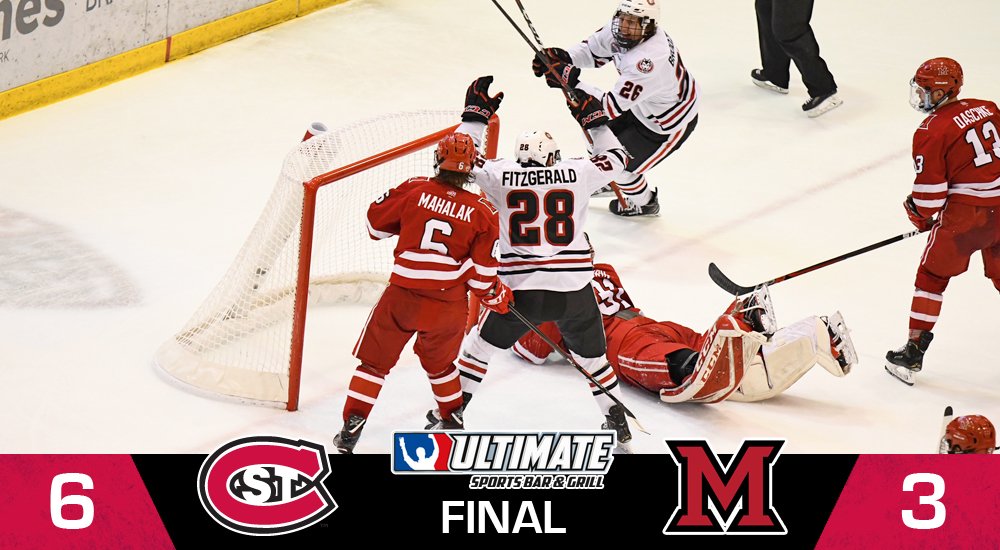 Huskies fans, we'll see you in @SaintPaul next weekend! #unleashSCSU 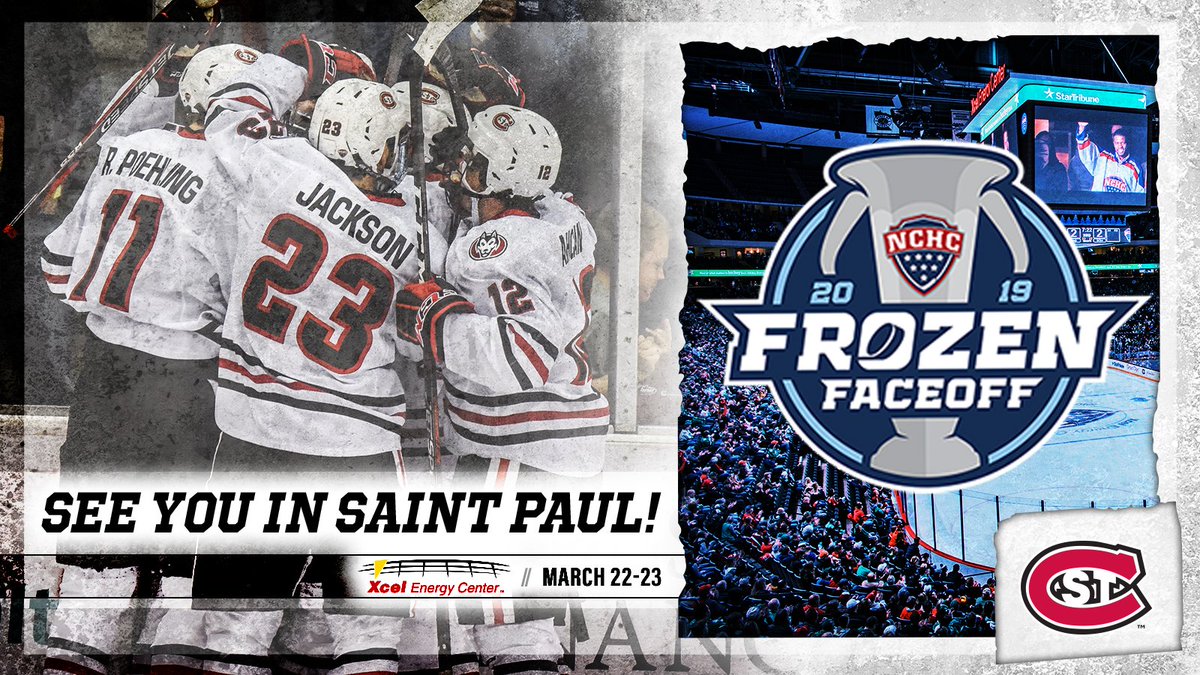 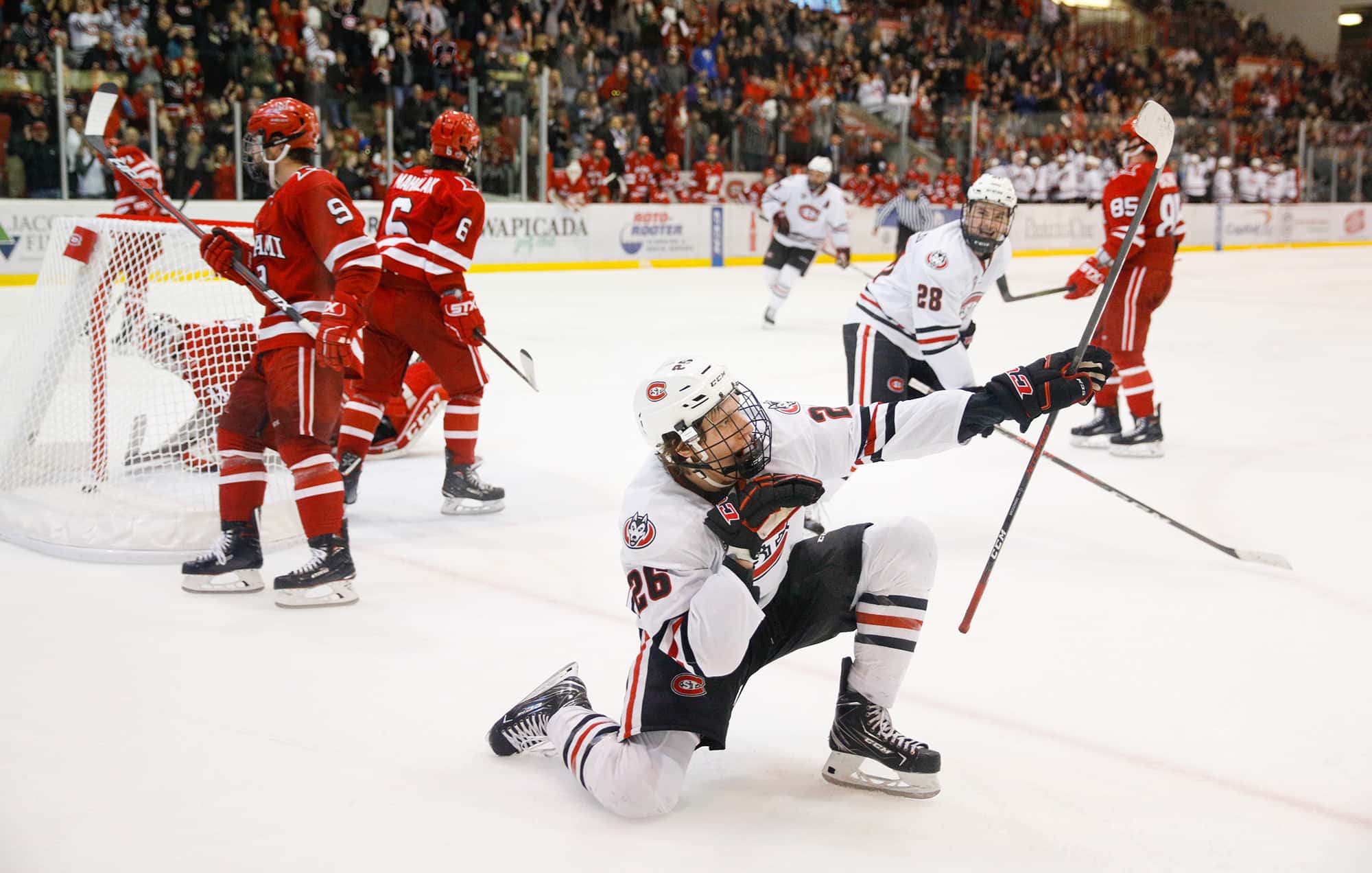 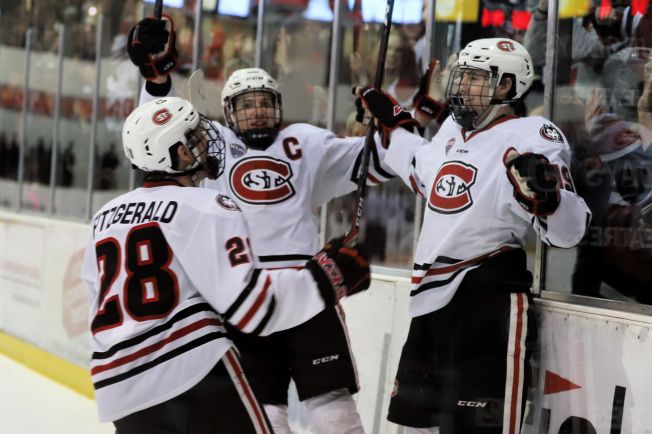 And for future reference on the shuttle question, Shooter's also has one. Usually takes two trips as it is a smaller St. Cloud limo one. We usually take Blue Line south, they have a full size school bus. Crowds vary, seen 6 people on the bus, or completley full depending on the game.
Top
Post Reply
25 posts