It seemed like the Husky Production camera crew was having a hard time tracking the puck early. Especially keeping the play centered in the view. Same thing with the women's games this weekend.

I thought the color commentary by players Robby Jackson and Hannah Protykus and the play by play guy were pretty good( he seemed pretty nervous at times though, especially on the live stuff after, seemed like trying to go too fast, deep breath and relax).

The Husky Mag show they had was also a very good job by the students although they need to study up on the player's name pronunciations. Jude for Judd Peterson, Potrykus (Port-a-cuss instead of Po-tree-kus), Luke? instead of Jake Wahlin (Wall-Lean instead of Wall-in), Kuster (Kooster instead of Custer) and a few others were way off, court for rink etc.

Just thoughts or feedback so they can do better next time. Overall very good production, especially in game interviews, bouncing to other on-ice reporters etc. etc..

As far as freshmen players I thought Meier, Hentges, Bushy were very solid. I don't remember seeing much of Walker except for the too many men penalty- jumped on too soon. Might of been because the play by play was mixing players up. Play by play did a better job as the game went on.
I would have gone to the game but had 2 other commitments before and after. Had to eliminate the drive.
Thought Larson's comments about zone entries was dead on. I missed Mikey Eyssimont on the PP right half wall. We need to find another blazing shooter on that side of the PP. Although Robby ripped that one off the crossbar- a one timer not the individual freezing everyone and picking a corner that Mikey could do.
Seemed like Mount Royal picked off/blocked a lot of our interior passing, probably the rust Larson was referring to. It probably helped Mount Royal playing Mankato the night before.
I might have to watch it again on nchc.tv, have to admit I missed portions of the game - Vikings/ Bulldogs/Gophers, Walking Dead and open hockey.

SC Times
SCSU gets rust out in exhibition win, 1st time behind Huskies bench for Larson

I just checked out the pronunciations on the roster that Mick Hatten put out. Wall-in is listed for 4 players (Wahlin, Ilvonen, Walker and Hammer) and Eyssimont (Hentges) and Borgen (Perbix) are still on there. 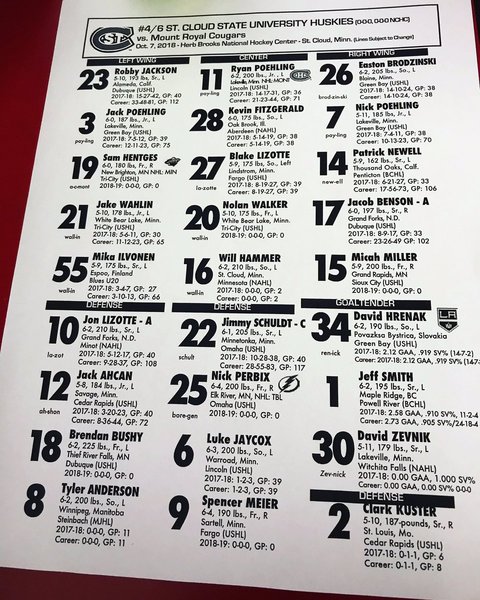 Also, not really cool with the fact Easton got a penalty for defending his teammate after said teammate was head locked by a butthurt player the SECOND the puck entered the net for a Husky Goal

Blake got away with checking the guy behind the goal from behind and that's the other player came after him. This GIF doesn't show the hit but at the beginning of the GIF it shows the other Mount Royal player getting up from going headfirst into the boards behind the net. So basically he didn't like the hit Blake gave on his teammate.
https://twitter.com/i/status/1049087553108938752" onclick="window.open(this.href);return false;

Watched it again some last night and some this am. I was really impressed by Nolan Walker on both ends. Great speed, good defensive stick and position. Good hands and created space and set up with drawing guys in with that extra juke or move. Set up the first goal for Benson and made a few other nice feeds. He had really short shifts though compared to the Fitzy line.

I really really wish I could have seen him play with Mikey Eyssimont, oh well.

I was thrown off early with the announcer calling Walker Miller the first few shifts, got it right and corrected himself later. #15 vs #20?

Fitzgerald's line ( 2 Poehlings) looked really good offensively (Fitzy set up and had quite a few moves and looks, fast) but a lot of chasing and puck watching on the defensive end and losing guys/coverage.

Rust was showing with all the passes in the Mount Royal skates but credit Mount Royal being in great position and tying up sticks and passing lanes. Missed some open one's not quite ready for it or nerves. Blake Lizotte and Sam Hentges.

Of course Brad Shepard #33 referee in the one corner can't get out the way of the play to save his life. I think he blocked 2 passes and a ring around attempt in one sequence.

Wahlin created quite a few steals in the neutral zone, Miller looks fast but not very patient with his shot or creating for others, seemed like he wanted to rip it as soon as he got across the blue line. I liked Hammer's play overall. Mika looked out of place a few times but battled hard down low.

Meier, Anderson, Jaycox, Lizotte and Perbix all looked solid on D. Ahcan can create a lot offensively but on the D end can be bulldozed.

Ryan Poehling looks like a beast this year. Robby Jaskin? (announcers pronunciation) (Jackson) and Blake Lizotte set up and had some great looks. Benson solid, looks like Mount Royal's Cade Jensen put a pretty hard cross check on him. Then Hammer slips/steps on his stick.

Schuldt made a great move off Jackson's pass to the wrong side, kicked it off the goalies pad and then pulled it from the goalies pad with his stick and tipped/followed it in. Nice patient and calm play.
Brodzinski also had a few close ones.
Overall it was a good look, didn't see the face-off stats but heard we dominated.
Back check and fore check looked good all night except for a couple sequences where guys were gassed.

Looks like Mount Royal made a few adjustments after playing us and Mankato and played some competitive hockey over the weekend. Tried to get physical (took too many penalties) and used some stretch passing to open things up for them. They had a few guys that looked good on their PP. The Lindren one timer(second goal), first goal was a nice tic-tac-toe, and they had a couple looks just off pipes. Zevnik made a couple nice poke checks or blocked attempted passes from behind the net.
Top
Post Reply
22 posts